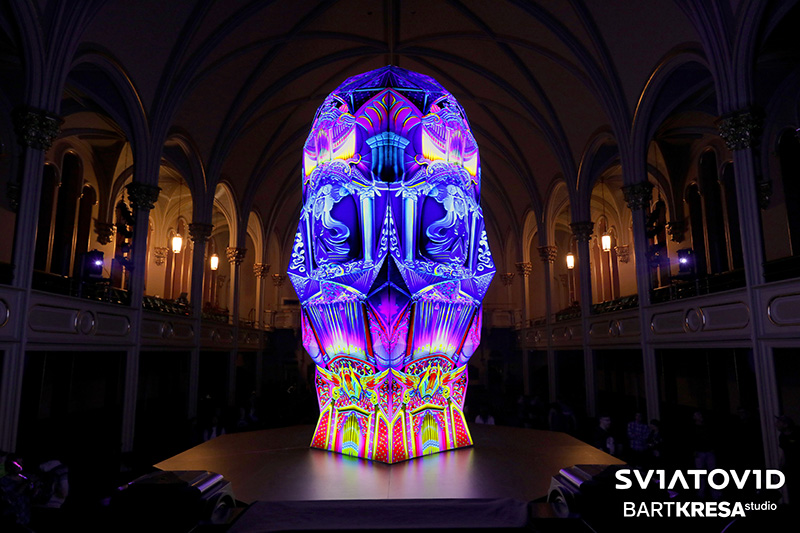 AVIXA’s AV Experience Awards celebrate AV as an art in the Best Dynamic Art Experience category. The winners of this award use AV in a truly avant-garde way to delight audiences. The 2020 winner, Sviatovid, a 15-foot tall, 360-degree projection mapped sculpture created by BARTKRESA studio, was inspired by a ninth century Slavic deity, and a medieval sculpture of the same name.

The studio bridged design and technology in the creation process. The team used a 3D printer to create a scale mock-up of the sculpture and used a pico projector to test designs. This allowed for adjusting the sculpture and projection designs simultaneously.

This impressive digital art creation serves as a modern day “totem” with four faces – the sculpted figure sees all. And it has seen a lot in the intercontinental journey the project has taken since it debuted at Integrated Systems Europe (ISE) in 2019. Sviatovid then traveled to the Centre for Meeting Culture in Poland, InfoComm in Orlando, the Luma Projection Arts Festival in New York, and InfoComm India in Mumbai.

The team improved and customized the projected content for every tour stop. At ISE, Sviatovid was a show activated by the night. Because the sculpture remained covered during the day, the removal of the cover and illuminating of the sculpture became a ritual for welcoming the light. In Orlando, Sviatovid appeared in a lounge space on the trade show floor. Low overhead lighting and a meditative soundtrack were employed to create a refreshing break from the fast-paced and high-stimulation displays that filled the exhibit hall.

Bart Kresa founded the BARTKRESA academy of Projection Design in 2019 as a one-year intensive residency for recent art school graduates interested in pursuing the art of projection mapping. Students worked closely with BARTKRESA studio’s senior designers and animators. The culmination of the summer session was to present their work at a global arts festival.

This came to fruition at the Luma Festival, a projection arts show held in Binghamton, New York, which draws a crowd of 30,000 and asks the question, “What experiences can we share by transforming the urban landscape into animated canvases?”

The Sviatovid appearances at the Luma Festival took place in an ornate and beloved 19th century church. In an homage to the striking architecture of the church, the students of BARTKRESA academy created a show inspired by the church spire, pipe organ, and stained glass. Sviatovid succeeded in creating a transformative experience within the church without projecting on any of the existing architecture.

The combination of Sviatovid’s dramatic shape and scale with bold projections, a vast content library, and custom cinematic soundtrack created an unparalleled opportunity for the students, and a memorable experience for festival attendees. “We were thrilled with the results of the Sviatovid shows, which kept audiences engaged in person and on social media. There were lines out the door of the venue each day,” said Tice Lerner of the Luma Projection Arts Festival.